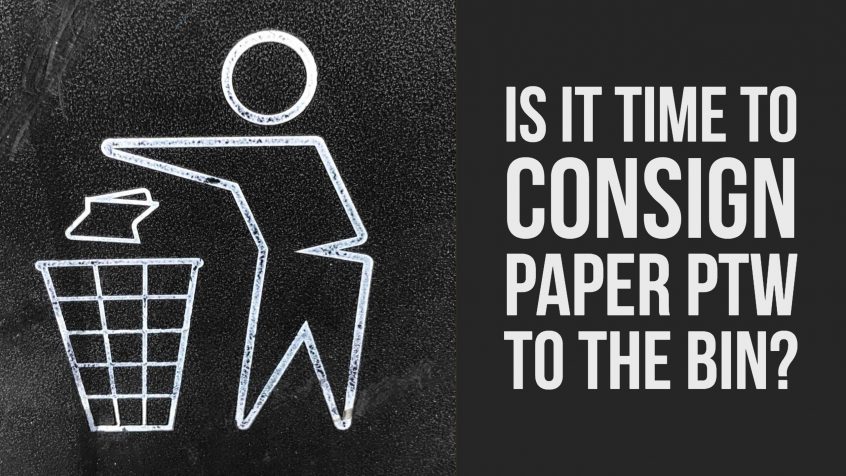 This is a transcript of the webinar of the same title and highlights some of the deficiencies with paper-based permit to work processes and introduces the advantages of e-permits in overcoming these deficiencies. Note that as an accurate transcript the language is conversational and not perfect written English.

Thank you very much indeed for joining the webinar this this month. We’re looking at whether or not paper should be confined to the waste paper bin and we are going to be taking a quick look at the issues and problems around paper permits that I’ve picked up from talking with clients who’ve started looking at e-permits. I always try and understand what it is they currently do now and the theme keeps coming through about some of the complexities of paper so we’ll take a look at those and see what they are.

So, is it time to consign paper permits to the bin? 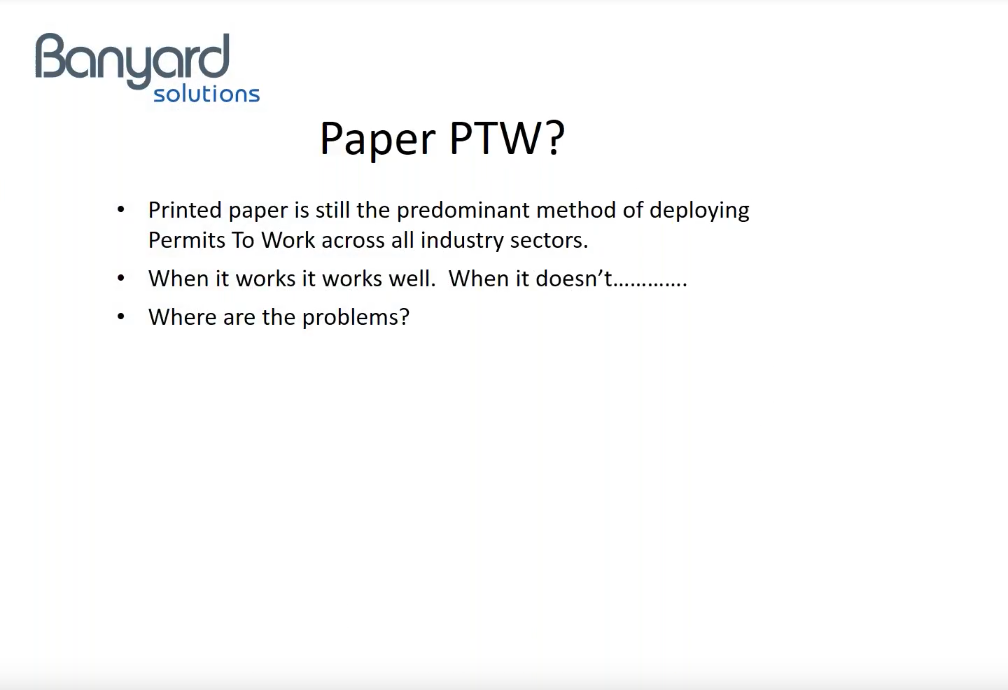 Paper is still the predominant method of deploying permits across pretty well most industry sectors that we come across. There are some good users of electronic permits, particularly in the financial sector and some of the highly regulated sectors, but in many it’s still paper that is predominant, and the issue of paper is when it works it works very, very well but when it doesn’t, that’s when there can be problems in the whole system. 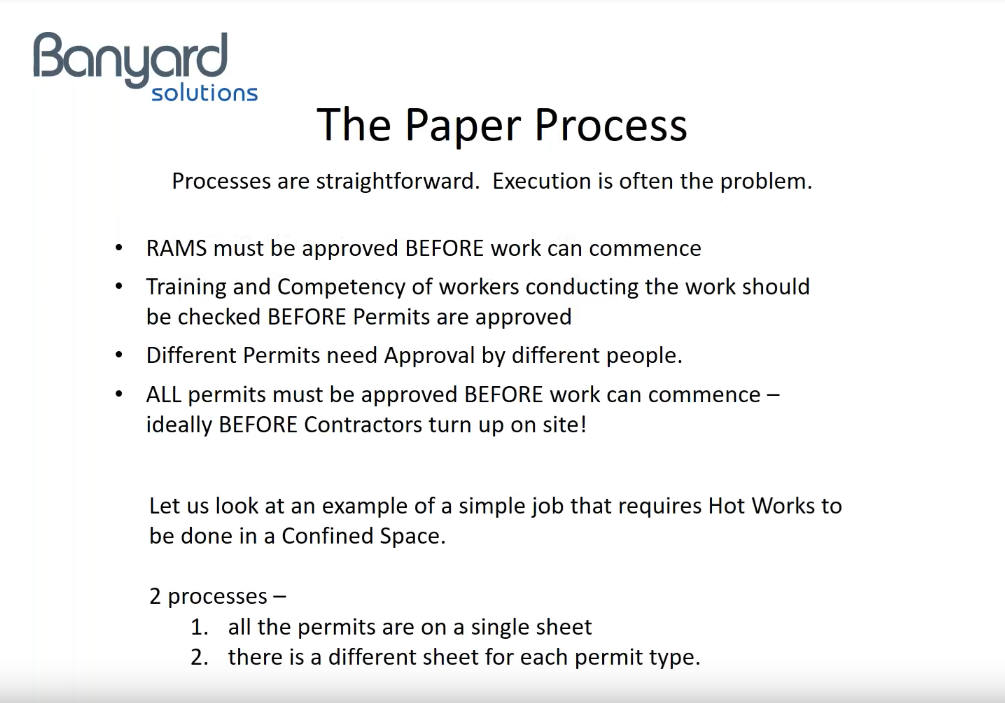 The paper process is actually quite straightforward. It’s often the execution that is the main problem. The process has to be pretty similar for everybody, but I have taken some some license in putting together the examples that you’ll see in the presentation.

First of all, RAMS have to be approved before work can commence. That’s always taken as a given and it’s something everybody should be ensuring happens.

Training and competency of workers conducting the work should be checked before permits are approved. That’s an essential thing to make sure that people who are turning up on-site to do some work for you are actually properly trained and qualified to do the tasks in hand and they’re not putting themselves at risk.

Different permits need different levels of approval. So access permits, for example, may just need to be approved by a site manager. The hot works permits may need to be signed off by two or three different individuals from different groups – maybe one from health and safety, one from technical services and, maybe, the site manager as well. So, different permits need different levels of approval. However, all the permits must be approved before the work can commence and ideally before the contractors even turn up on-site.

Let’s look at a simple example of a job that just requires some hot works to be done in a confined space. My experience from talking to people is that there are two types of paper permits out there. Some people have huge A3 sheets of paper where everything is all on the one sheet and, if they’re not doing things like electrical work, or they’re not doing working at height, those parts of the permit are just not completed, they’re left blank. The other type that many customers use has a different sheet, a different paper permit for each different permit type. So, we’ll have a look at some of the issues that surround both of those. 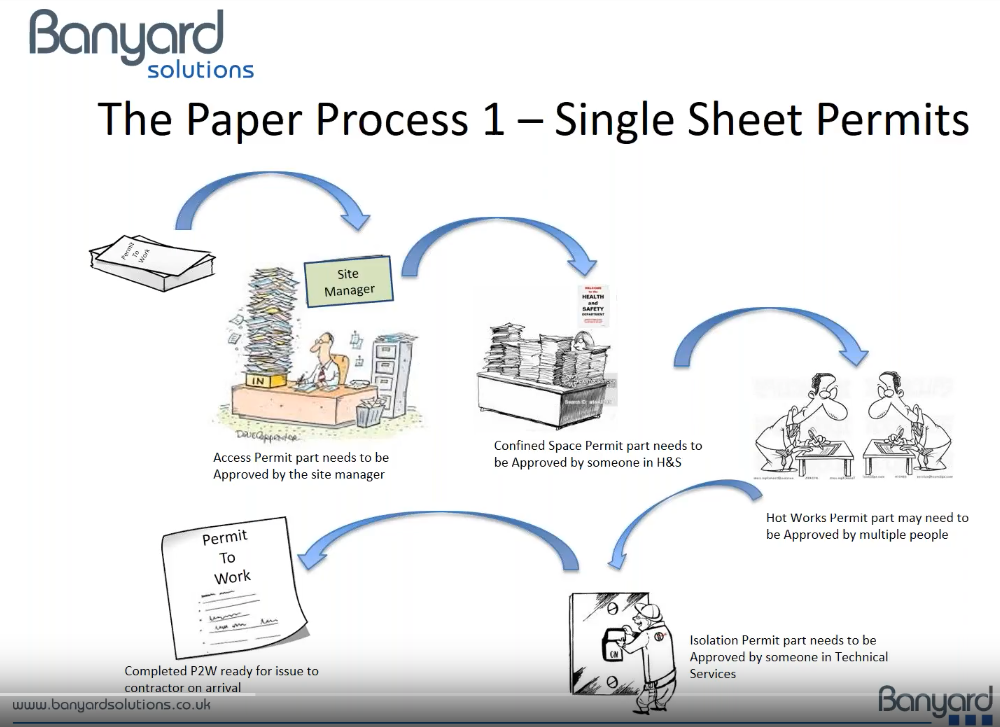 With single sheet permits, it’s actually very much akin to a manufacturing process flow – the piece of paper has to move from one person to the next person and on to the next person before it can be completed. So, in this example, the access part of the permit needs to be approved by the site manager. That then moves on so that then the confined space permit needs to be approved by someone, for example, in Health and Safety. Hot works permits may need multiple people to sign them off and, within the hot works domain, someone may demand that an isolation takes place and that will go to people in technical services who will then approve the isolation permit. Only then, once everybody has signed off, is that complete permit to work ready to issue to the contractor on arrival. Now, it doesn’t have to follow that sequence, obviously it can go in whichever sequence it wants to, but the more potential routes you have through for a single piece of paper through the building, the more chance there is for it to get lost, for it to be sitting in someone’s in-tray and covered up with other things, and things can get delayed and that can cause problems when contractors turn up to do the work and there’s no permit there for them to use. 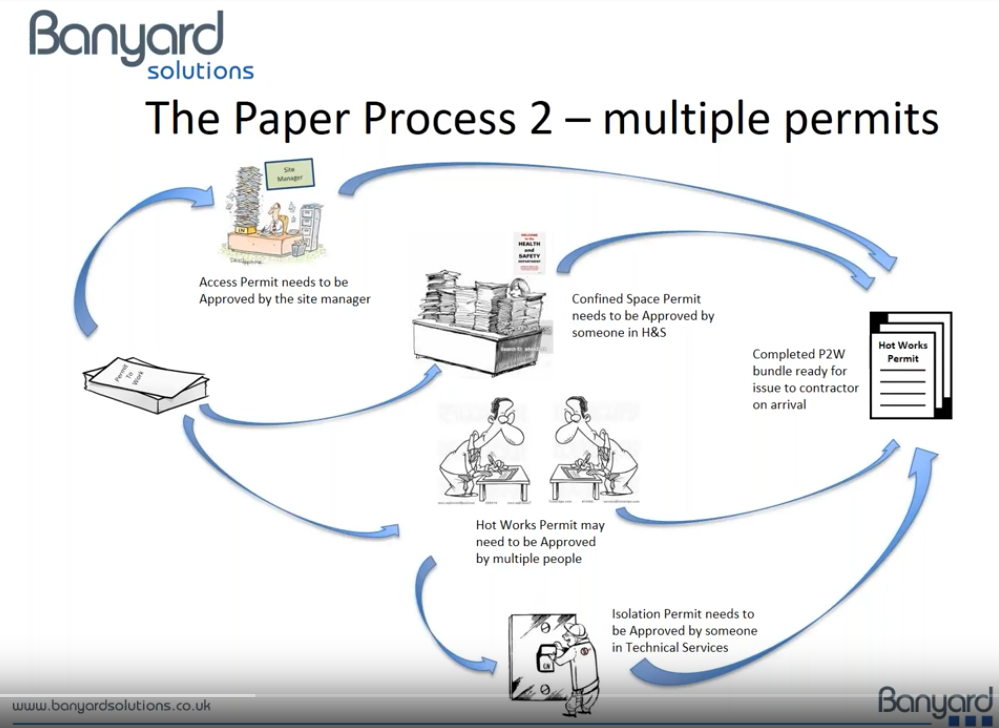 This second process shows that each separate piece of paper then needs to move to the different people that are involved in signing off permits. The access permit sheet will go to the site manager, the confined space permit will go to Health and Safety, hot works permits will go to the couple of guys in this picture who need to sign off that same piece of paper, and then the hot works permit people will have generated the requirement for an isolation. An isolation permit will need to be approved by someone in technical services and then somehow all those pieces of paper come together in a bundle that is then ready and available for the contractor on arrival. Obviously a lot of the issues here are the same – any one piece of paper that can get lost in the system means the permit bundle is not complete and it needs to be complete before that contractor turns up on-site. 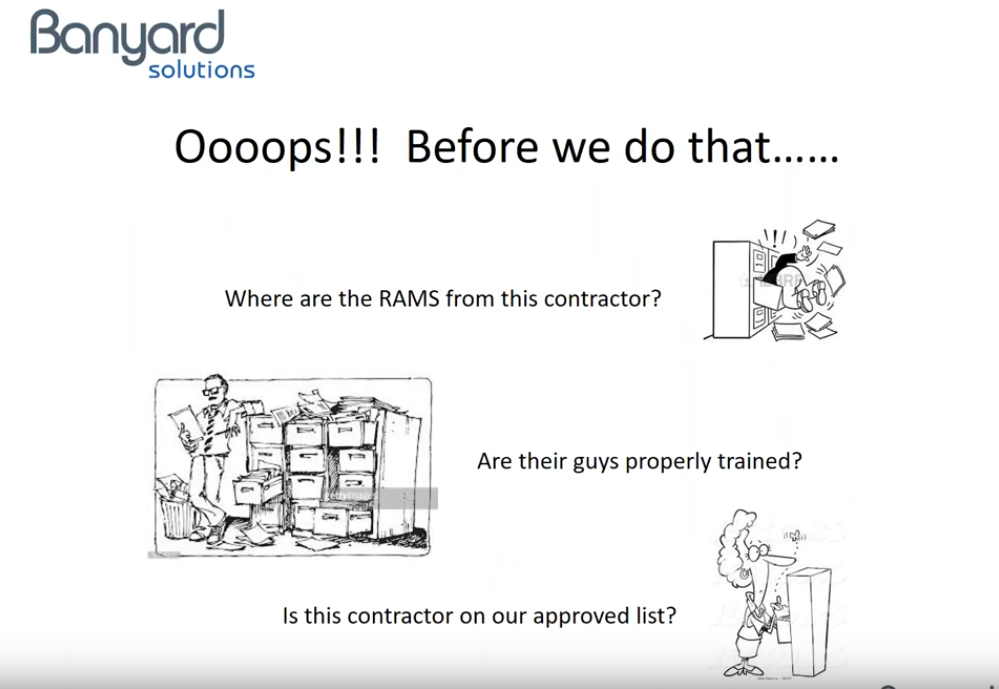 Oops, sorry, before we do that we’ve got to check the RAMS. So, we need to go and find out where the RAMS are from this contractor; check that they’re correct for the job; are their guys properly trained? We need to go through the training records (make sure these guys that are turning up are properly trained and qualified to do the work) and, of course, is this contractor actually on our approved list or still on our approved list? These things we need to check off as well and I hesitate to say sometimes these things are not done as consistently and as in-depth as perhaps they should be. 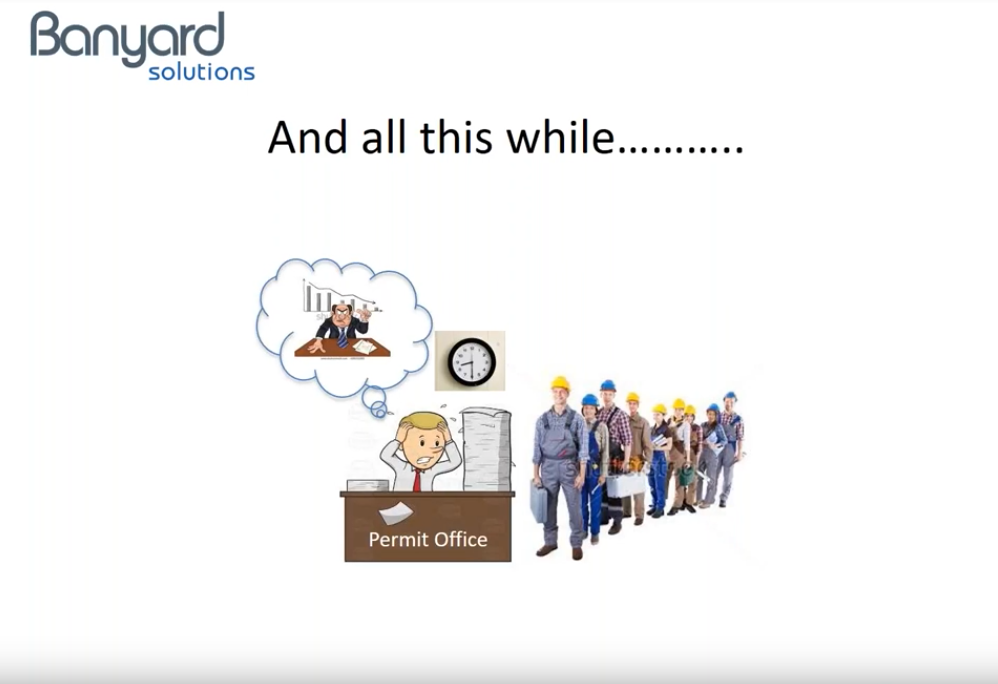 All this is done while there’s a queue at the permit office desk. Everybody wanting their permits delivered to them and upstairs there’s obviously the efficiency group that need to make sure that the office is running, or the building is running, or the manufacturing plant is running properly and efficiently and any delays in getting work done can have an impact on revenues of the business so the poor guy in the permit office is stuck in the middle, “I haven’t got all the sheets of paper but one of my sheets of paper is missing the contractors standing at my desk what do I do?” That’s that’s a picture that many people have painted to me in the past. 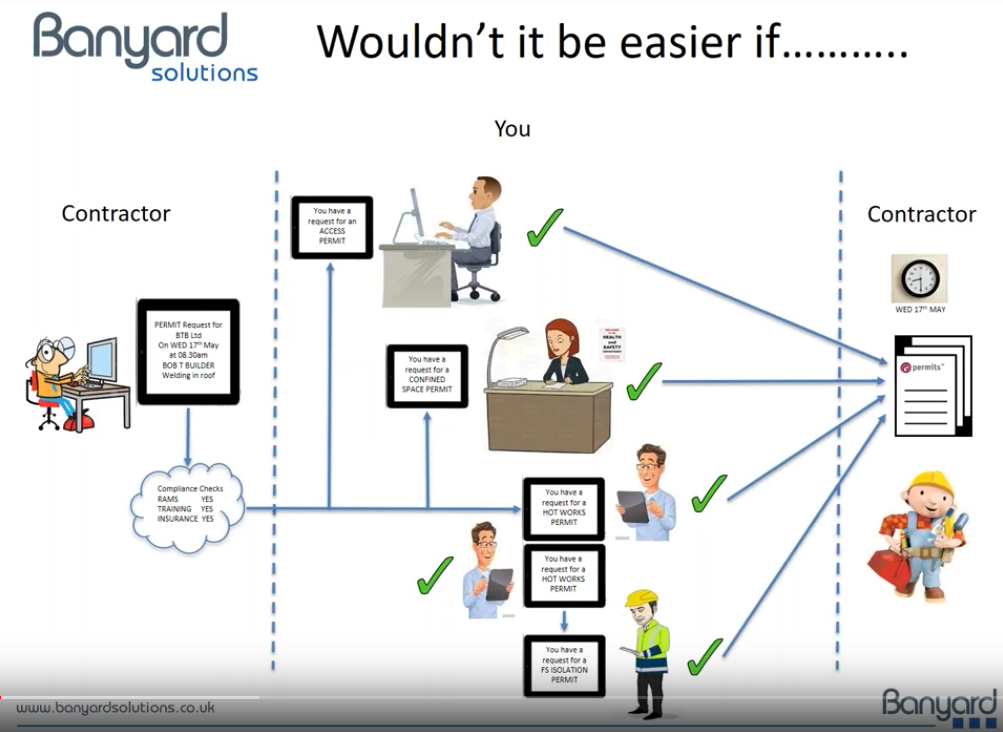 So, wouldn’t it be easier if the contractor did a lot of the work upfront? So, they actually put together a request to say, I want to come in on a particular date, in this example on Wednesday the 17th of May at 8:30 in the morning, and the guy coming on site is going to be Bob the Builder and he’s going to be doing some welding in the roof. And, before I actually submit that permit request, the system goes through and does all the compliance checks necessary. Are there RAMS in place that have been approved for this type of work? Yes. Is the training for this chap Bob the Builder up-to-date and current? Yes. And, has the company BTB Limited got all of its relevant insurances in place that meet the requirement that we have for doing work on-site in this particular example? And the answer there is yes.

Only once all those compliant checks are done can that permit actually come through to you and then it’s routed to the relevant people much as in the example of the parallel process that we saw earlier on where different pieces of paper went to different people. In this instance, a different email goes to individuals to say that you have a request so the site manager, for example, has an email that says you’ve got a request for an access permit that needs your approval. Health and Safety have a request for the confined space permit. The hot works guys, two of them need to sign this off. They both get the same request for the hot works permit and both need to sign it off before it’s approved. Then, hot works actually generates a request for an isolation. In this instance, a fire systems isolation needs to be conducted and done.

Only when all of those things have been put together do you actually end up with a bundle that says, yes, these permits are now valid and hopefully what that means is Bob turns up on Wednesday the 17th of May at 8:30 in the morning. This will remove a lot of the issues that you have. It will get rid of the fact that there are queues at the desk saying “I need a permit,” because they shouldn’t be allowed to have a permit unless they’ve preempted it and actually put in the permit request in advance giving you time to approve those permits.

You should really be tasking your contractors to, say, put in a minimum time – don’t submit permit requests less than three days before you intend to do the work because we may reject them. That’s not necessarily always going to be the case. If Bob can do it tomorrow that might be very beneficial to you as a business so you can still approve it. You’re trying to push contractors into a way of working and a way of thinking that makes them sit and try and do things correctly.

So, that’s the concept that we’re looking at with regard to electronic permits – put a lot of emphasis on the contractor to put in the request. What it is they want to do? Where they want to do it, how they want to do it, and when they want to do it. Do all the compliant checks up front so that you only get a request for a compliant permit, therefore, your job is then purely to look at that permit. Identify whether you’re happy for that work to take place at that time or not and, if it’s not, you can reject it and the message would go back to the contractor who would then have to resubmit on a different date based on whatever reason it is that you rejected the permit. To give you a much more streamlined process, less chance for something to to get lost, people are alerted if they haven’t signed off permits and it’s very clear that if the contractor hasn’t received the permit bundle back to them they can quickly ring up to say “I’m supposed to be coming in tomorrow and I still haven’t had all the permits signed off yet, what’s going on?” So, you can push the emphasis and make the communication much easier between yourself and the contractor.

So, is it time to consign paper permits to the bin? We believe it’s “yes”.

You can view the conclusion of this webinar and watch a demonstration of e-permits by clicking this link.