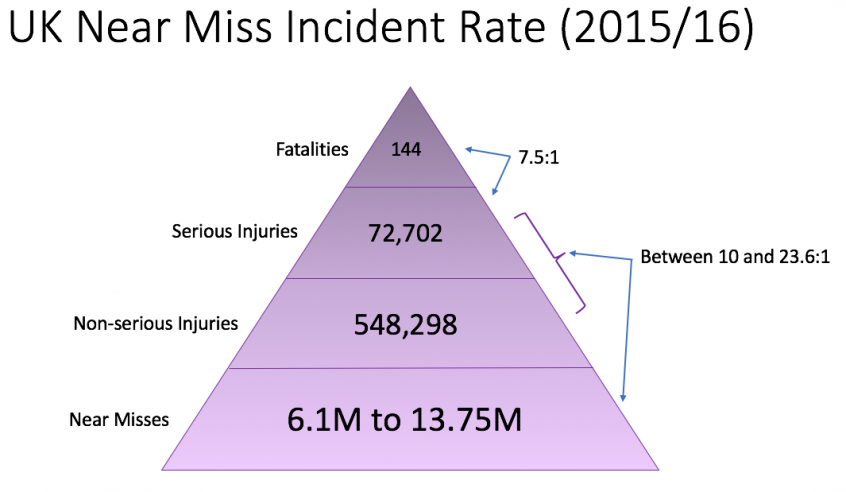 The difference between a near miss and an incident is often nothing more than luck. A game of chance but what are the odds: are we playing Russian roulette (with a 1 in 6 chance) or something with much longer odds altogether?

This last question on ratios is a reference to H. W. Heinrich’s accident triangle from his book “Industrial Accident Prevention: A Scientific Approach (1931)” which deduced that for every major injury there are 29 minor injuries and 300 near miss events. The implication being that if health & safety management focuses on reducing the number of near misses, then the number of injuries will fall proportionately.

Perhaps unsurprisingly, Heinrich’s initial analysis has come under scrutiny with Bridget Leathley of Health and Safety at Work (among others) questioning whether you can correlate the smaller near misses with the worst, sometimes fatal, accidents. In her 2014 article, Bridget used the example of the Baker Report on the BP Texas City Oil Refinery explosion in 2005 which concluded that “there is little relationship between every­day near misses and the circumstances that result in a major process disaster.” The report further blames BP’s reliance on data over process safety understanding for the “false sense of confidence that BP was properly addressing process safety risks.”

In the Netherlands, Dr Linda Bellamy used a database of 23,000 occupational accidents and segmented by cause/hazard and resultant outcome (recoverable injury, permanent injury or death). She concluded that there are different ratios for different situations including cause/hazard, sector and, even, country. More importantly, she concluded that investigating the underlying causes of near misses can prevent the more major incidents of the same hazard type from occurring.

While the validity of ratios has been brought into question, there is no doubt that near misses should not be ignored and that a culture of continuous monitoring, reporting and improvement will ensure learnings that can prevent major incidents in the future. The report into the 1999 Ladbroke Grove train crash said that the crash might have been avoided and 31 lives saved “if management had applied the lessons of past SPADs [signal passed at danger], and if signallers had been adequately instructed and trained in how to react to a SPAD.”

Indeed, with the new sentencing guidelines under the Health & Safety at Work Act 1974, sentences are much more penal when it can be shown that lessons were not learned.

Data points to estimate the total number of near misses include:

The HSE’s own statistics show the ratio of non-serious injuries to serious injuries to be 7.5:1 (validating the 7:1 above), suggesting that around 23 near misses per injury to be equally viable. This compares with Heinrich’s ratio of 10:1 from 1931 and produces a range of near misses (for the same 2105/16 time period) of between 6.1 million and 13.75 million. 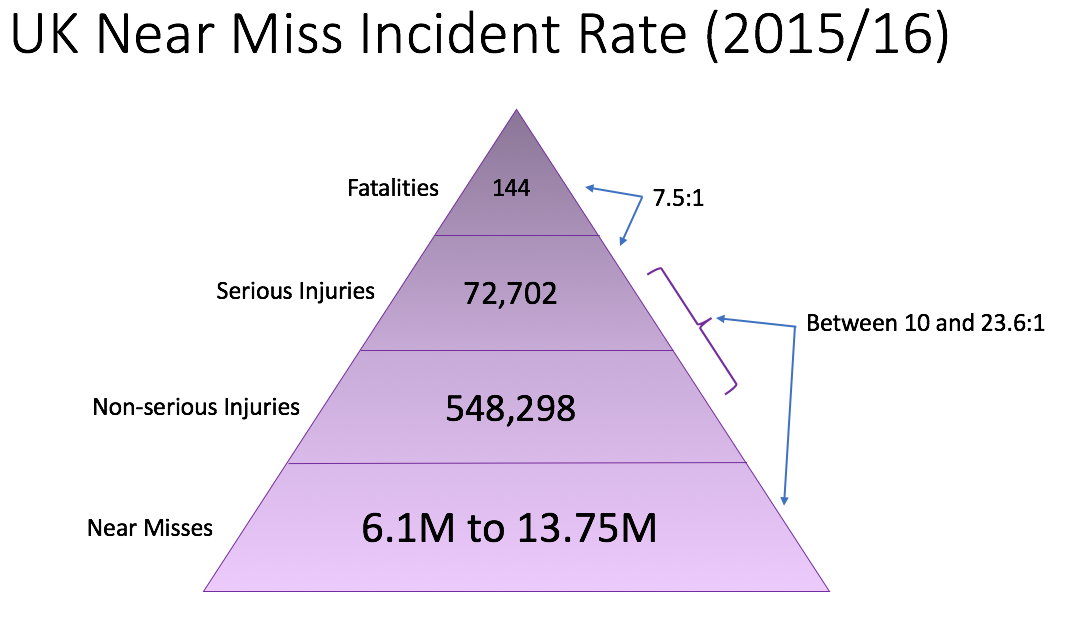 So, not quite a game of Russian roulette when looking at the chances of a near miss becoming an incident (and much that we can do as an industry to minimise those chances), but when you consider that there are approximately 30 million workers in the UK, then the chances of any one of us being involved in a near miss in any given year are between 1 in 3 and 1 in 5. Altogether more sobering.

If you would like to see a demo of how e-permits can help prevent your near misses becoming incidents then please complete the demo form on the left.

2 Comments on “Near Misses, Russian Roulette and H. W. Heinrich”