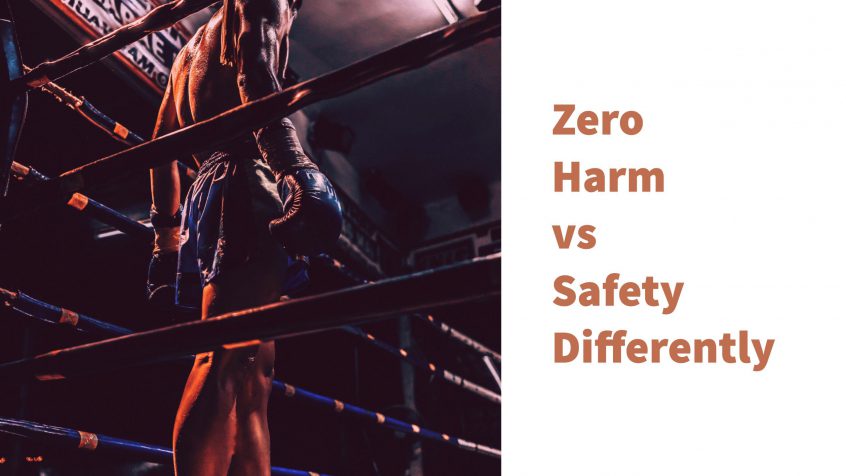 This post is a scene-setter that compares and contrasts the zero harm policies advocated by H.W. Heinrich and the Safety Differently approach of Sidney Dekker who advocates focussing on major incidents and people’s ability to manage risk intuitively rather than worrying about near misses and minor incidents.

In future posts we’ll tie the two approaches back to corporate governance as it relates to health and safety and we’ll look at 2016/17 fatality rates in the UK to see if we can draw conclusions around the relative safety of employees and contractors.

When implementing a strategy to reduce major incidents and fatalities in the workplace, should you worry about small incidents, including the near-misses that don’t result in any injury? This is a question many companies are grappling with, not least because of vocal proponents of focusing most or all your safety efforts on the major risks. Is this right, or should you sweat the small stuff too?

The accident triangle stems from work by H.W. Heinrich in a book first published in 1931 called Industrial Accident Prevention, A Scientific Approach. We covered his work in an earlier post and in positing that between 1 in 3 and 1 in 5 of us will suffer a near miss at work each year. Heinrich’s premise is there is a ratio between all accidents that happen in the workplace. He stated that there is one major injury incident for every 29 minor injury incidents. In addition, for every 29 minor injury incidents, there are 300 incidents that don’t cause an injury.

His conclusion was that reducing minor and non-injury incidents will also reduce major incidents.

Many health and safety experts, including the Health and Safety Executive, have distanced themselves from the accident triangle approach. This is not necessarily because it’s incorrect, but rather that the data is insufficient. In fact, many people who criticise Heinrich’s work question how he could have known the number of accidents that don’t cause injuries given they were not consistently recorded.

This situation still exists today. While there are some companies that record non-injury accidents, the vast majority don’t.

Many also believe having a focus on the small things results in a lack of focus on serious risks.

The ultimate success of an accident triangle is to reduce accidents and injuries to zero. An Australian university professor, Sidney Dekker, presents a different theory. Dekker says zero harm policies are wrong for two main reasons:

• There are no statistics backing up the approach

Dekker also says zero harm policies lead to a culture of target chasing instead of focusing on real safety issues. This happens in several ways including:

• The development of a culture of low reporting of minor or non-injurious incidents because management views them as negative and doesn’t want to hear about them.

Dekker’s conclusion is to stop trying to prevent all accidents and instead focus on the serious risks the company and its workers face.

Which Approach is Right?

So, should you focus on the small things, including accidents that don’t cause injury? Or, should you abandon the policy of preventing all accidents in favour of concentrating on the most serious risks?

Proponents of the latter often cite the explosion at BP’s Texas City Oil Refinery in 2005. This accident killed 15 workers and injured over 180 more.

Before the accident, BP had a policy of “no accidents, no harm to people”, i.e. a zero-harm approach. The Baker Report into the accident found this was flawed. It said BP “mistakenly interpreted improving personal injury rates as an indication of acceptable process safety performance at its US refineries”. The report’s authors added there was a “false sense of confidence” at BP that the company was adequately addressing the safety risks it faced.

Does this mean Dekker is right? Was BP’s zero harm policy at least partly to blame for the Texas City Oil Refinery explosion?

While compelling on the surface, this conclusion only looks at a small part of the issue. In fact, a substantial element of the Baker report’s 374 pages is about the weak safety culture in BP. This is where BP’s biggest failure occurred, not in trying to eliminate all injury-causing accidents. In other words, following an accident triangle methodology to reduce all accidents can work, providing there is the right safety culture in the organisation.

The right safety culture also overcomes the issue of correlation, i.e. the often-cited problem that there is typically no correlation between a minor incident and the multiple human and process failures that are usually involved in a major incident. However, with a strong, healthy, and positive safety culture, both the minor incident and the major one can be avoided. Remember also that the difference between a near miss and an incident is often no more than pure luck.

Back to Dekker and his conclusion that companies should not aim for zero incidents – while the conclusion may not be correct, his reasonings are sound. In other words, companies should combat the problems identified by Dekker by implementing a culture of safety rather than changing the focus to serious risks only. This begins with corporate governance, something we’ll dig into further in future posts.

A good example of establishing a safety culture and of using both Dekker’s approach and the accident triangle is CHEP, the global leader in pallet and container pooling solutions. It started to change the culture in its European business, which includes 1,500 UK and Irish employees, following the successful implementation of a strategy at its parent company, Brambles, in Australia.

The results were impressive:

• Lost-time incidents reduced from 30 a year to one.

• Near-miss incident reporting went from zero to thousands a year – this is because the company previously didn’t record near-misses. Now it is using them to learn and improve.

• Absenteeism reduced from up to seven percent a year to two percent.

• Savings of hundreds of thousands of pounds.

In conclusion, companies need to focus both on the major risks while also sweating the small things. However, the results will always hinge on the successful creation of a safety culture throughout all levels of the company, and this starts with corporate governance.

Check back for the continued development of these arguments and to see the different impacts on employees and contractors. Subscribe below to receive notifications in your inbox of when we publish new posts.

2 Comments on “H.W. Heinrich vs. Sidney Dekker, Seconds Out…”