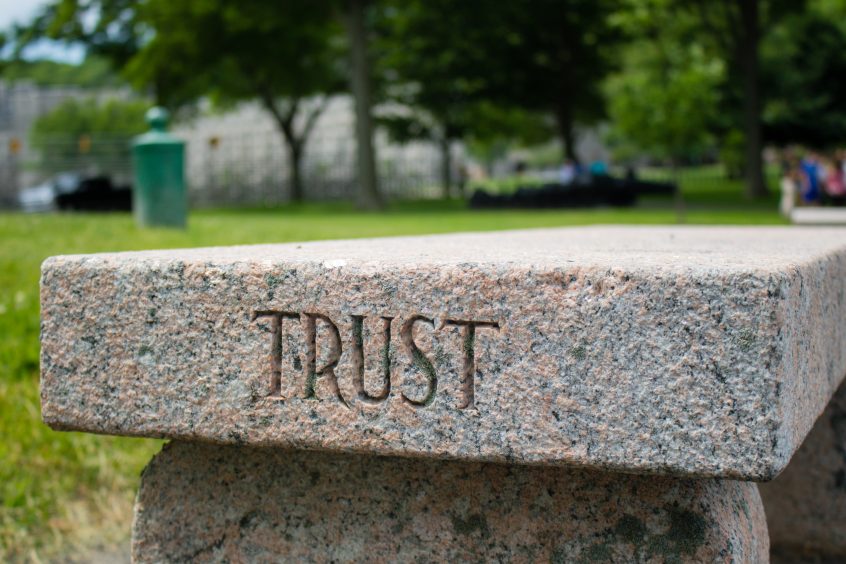 Can we meaningfully measure ‘trust’ in society and can we correlate that with worker safety? Would a more trusting society lead to better safety performance? One way to do that would be to compare trust metrics and safety performance across multiple countries.

Before diving into that, it’s worth examining why we’re asking the question in the first place?

In our last post on dynamic risk assessments we touched on The Peltzman Effect (the safer you make things appear (i.e. the more rules you have) then the riskier people’s behaviour) together with the concept of emergent behaviour and Dekker’s Safety Differently where people are the solution who, in the absence of rules, will behave more safely.

Dekker’s experience has been that his ‘more enlightened approach’ is “stymied by management’s fear of change, fear of losing control and by a lack of trust in their people”. Does a lack of trust manifest itself in rules? Is the rule book Maslow’s hammer for many unenlightened businesses and even Governments?

Anecdotal evidence from Dekker as well as others such as Simon Sinek, whose post-modernity presentations are always instructive, coupled with the General Social Survey (GSS) surveys in the USA highlight both the linkage between trust and rules and the slow decline of societal trust attitudes since the 1950s. 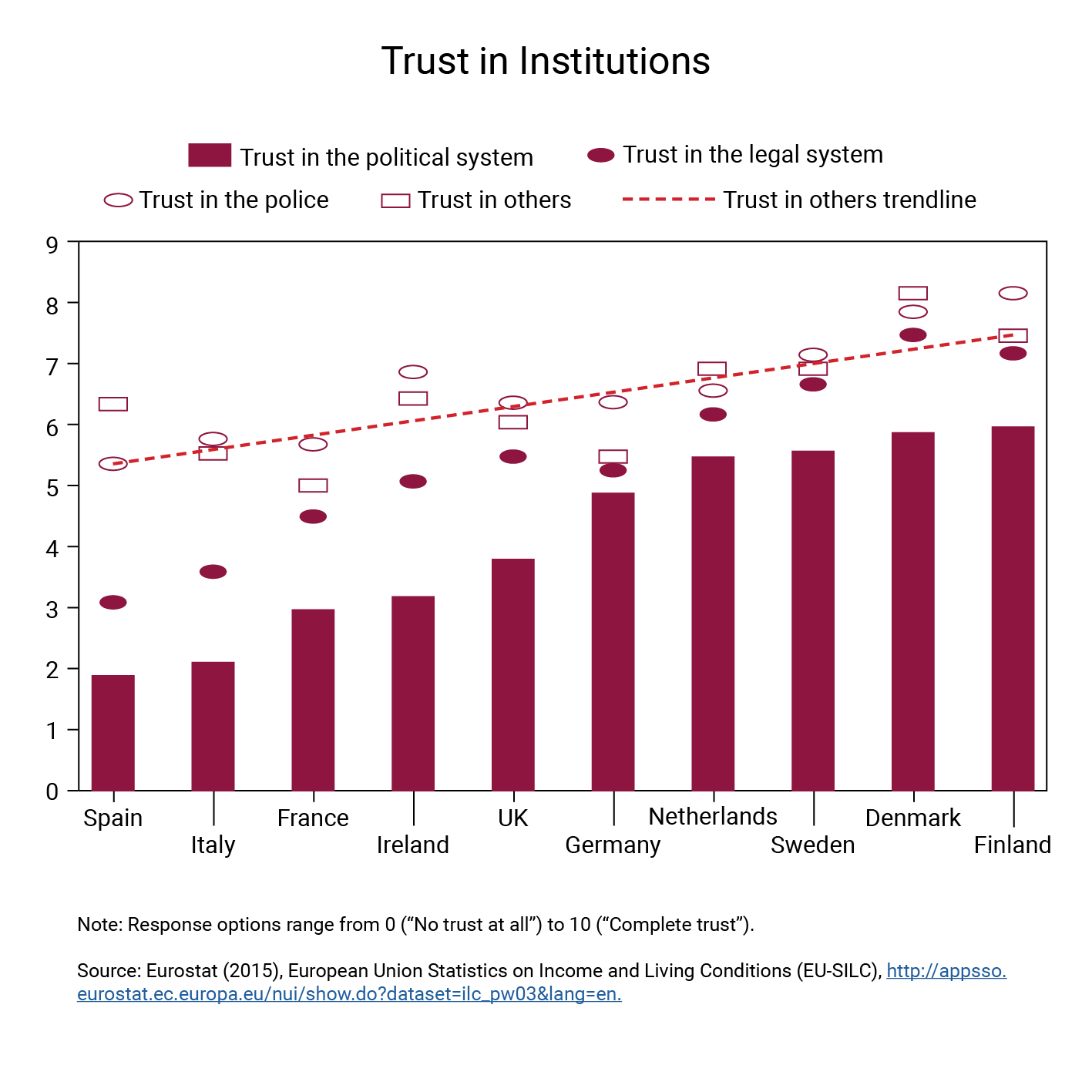 Lowest trust exists in Spain with highest trust in Finland. We’ll maintain the x-axis positioning of countries in subsequent charts, so remember low trust on the left, higher trust to the right. Note also, that this is a single snap shot from 2015 with no temporal change.

The trendline is plotted for trust in others but would be similar for each data set.

Eurostat does a lot of work normalising safety performance data across countries but it’s not an exact science. For example, the UK and Ireland do not include ‘driving for work’ fatalities in their published data whereas every other EU country does. Eurostat attempts to back out these causes of fatalities from every other country’s data but accepts it is unable to achieve 100% accuracy in doing so. The normalisation process also tries to normalise across sector such that countries with, for example, a high preponderance of agriculture in their economy (traditionally a dangerous sector in which to work) can be compared directly with those running economies comprising safer sectors. 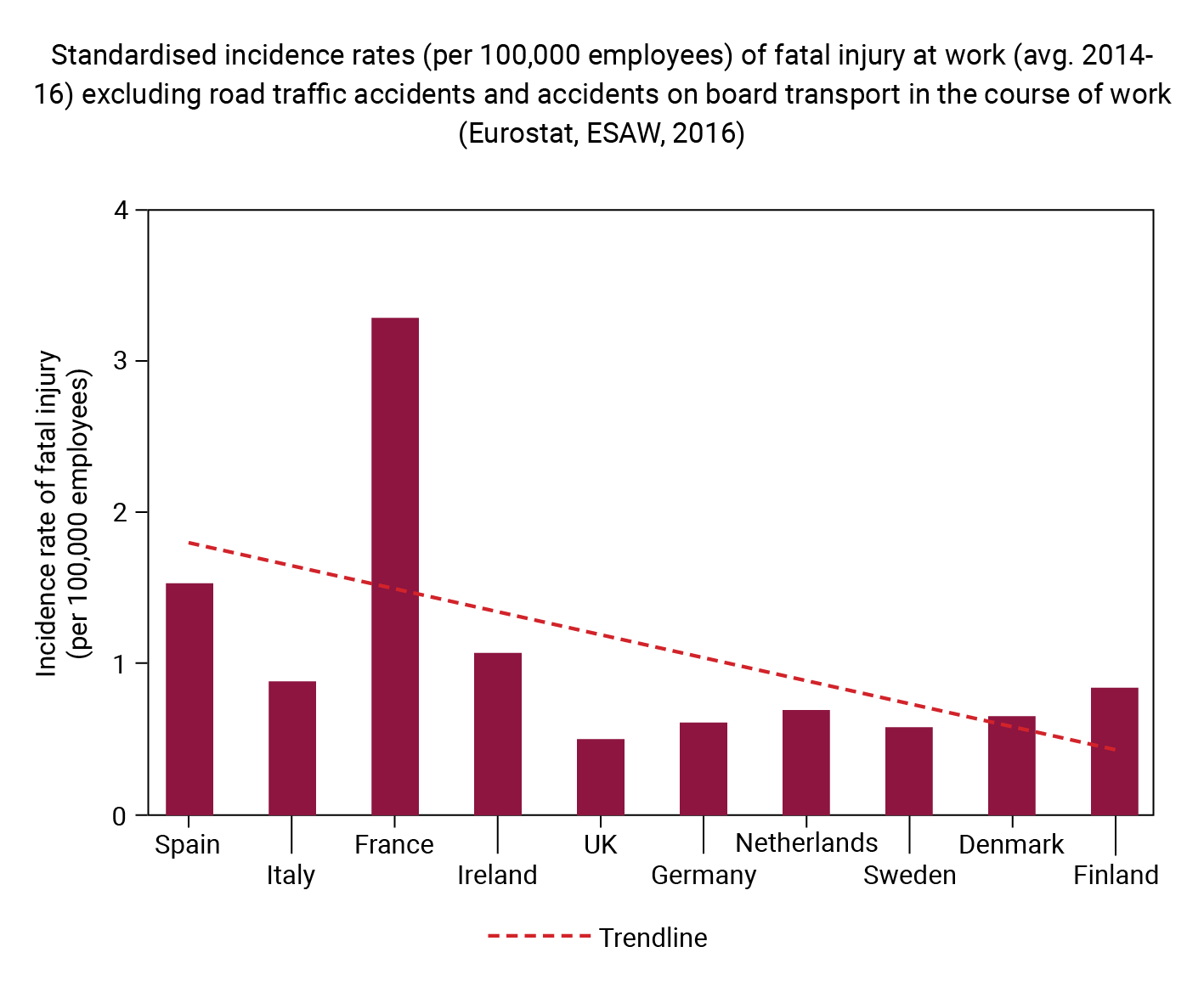 Is there causation? Might it be true that low trust leads to more rules and that those rules elicit riskier behaviour? Does high trust produce an environment requiring less rules and one which trusts people to figure out their own risks, thereby, producing safer behaviour?

You may not have spotted what may be an elephant in the room. If there is correlation, and possibly even causation, how come there’s been a slow decline in societal trust since the 1950s in parallel with improved safety performance?

Watch out for part 2 of this post in which we will endeavour to address these questions and add the stepping stones that are rules and risk assessments to cross the divide between trust and safety.