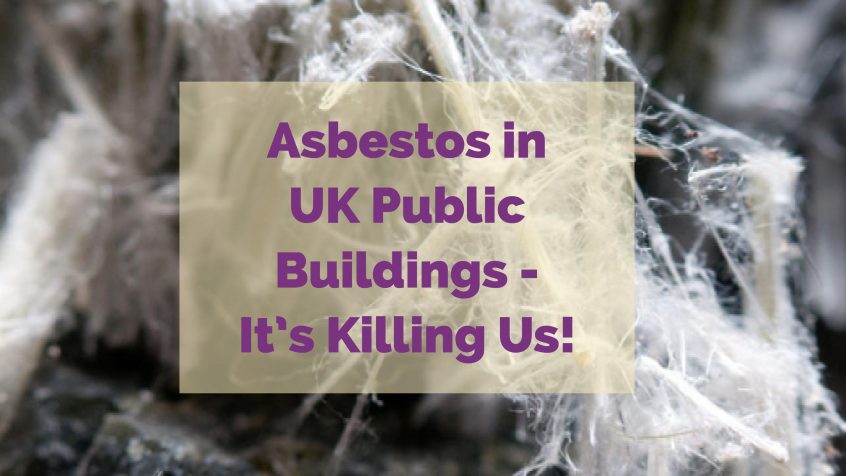 According to the HSE, any building built or refurbished before 2000 may have asbestos so can cause a health risk. A UK-wide ban on the use of asbestos came into force in 1999 so the assumption is anything built in subsequent years should not contain this deadly material.

Of course, the above timeline includes many public buildings as most were built before 2000. This includes schools, hospitals, museums, administrative buildings, and more.

As a result, the scale of the UK’s asbestos problem is enormous:

The Impact of Asbestos

Also, according to a 2014 University of Glasgow study, Scotland has the highest rates of mesothelioma in the world.

Figures also show direct correlations between asbestos in public buildings and deaths. As an example, take the information above that asbestos is present in almost every hospital in London. That information becomes even starker when you learn that since 2011, around 1,000 Londoners have died from mesothelioma. Seven of those were either doctors or nurses.

There are also figures that connect asbestos in schools with UK-wide asbestos deaths. For example, the National Union of Teachers believes over 300 teachers have died as a result of mesothelioma since 1980. Of course, if teachers are dying because of asbestos in schools, so are children. The Government’s own All-Party Parliamentary Group on Occupational Health and Safety reported that “Over 140 school teachers have died from mesothelioma in the past ten years. An unknown number of cleaners, admin staff and caretakers have also died. The number of children who have died as a result of exposure to asbestos while at school is unknown but evidence given to the Education Select Committee hearing on asbestos in schools estimated that up to 300 people a year could subsequently die from their asbestos exposure as a child at school.”

This is an ongoing issue, not something that stopped at some point in the past. I was exposed, you were exposed, your children are being exposed right now.

The current policy in the UK is to ‘manage’ asbestos where it is present rather than working to quickly eradicate it from buildings. This management policy includes public buildings.

This policy will, eventually, lead to the eradication of asbestos from buildings in the UK, but it will take a very long time – lifetimes, in fact.

The ‘management’ policy is in place because the HSE believes the risk is “negligible” if asbestos remains undamaged and is not disturbed.

The problem with this position is that the HSE’s ‘disturbed’ relates to some kind of facilities work being performed and does not take into account day-to-day activities which, themselves, can disturb asbestos. For example, pinning work to walls in a classroom can release 6,000 fibres and it only takes one to kill you.

So, what about eradication? This seems like a straightforward solution, i.e. asbestos is deadly so the best approach is to remove it. There are knock-on effects of an eradication policy, however:

So, an asbestos eradication programme is not a simple solution. It is not beyond human capacity to overcome these problems, however, particularly considering the risk of asbestos exposure in public buildings that we all currently face.

What is the Government doing now? An all-party parliamentary group recently looked at the issue of asbestos in buildings. It reported in 2015 and recommended legislation to speed up the removal of asbestos from all UK buildings, i.e. to move from a policy of management to one of active removal. The group even put target dates: it wanted asbestos removed from all public buildings by 2028.

The Government has yet to act on these recommendations so all public buildings (as well as other buildings) must adhere to the Control of Asbestos Regulations 2012, i.e. managing asbestos rather than proactively removing it.

The HSE carried out a review of these regulations and published its findings in March 2017.

Its recommendation to the Government is that it is not necessary to substantially change the current regulations. In other words, its recommendation is to continue with a policy of asbestos management rather than asbestos removal. It came to this conclusion after looking at “collective stakeholder evidence, cost/benefit analysis, epidemiological and enforcement data”.

So, the status quo will remain. Of course, this isn’t a problem exclusive to the current administration – successive governments over many years have failed to fully and finally deal with the UK’s asbestos problem.

All this does, however, is leave the problem for future generations to deal with. In the meantime, people continue to die and continue to contract asbestos-related diseases. Sooner rather than later, the country needs a different approach.

One Comment on “Asbestos in UK Public Buildings – It’s Killing Us!”